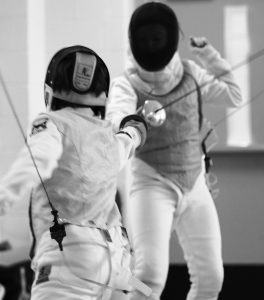 Imagine you’re locked in battle and your job is to out think, out maneuver and out score your opponent. But be careful, they’re doing the same to you! You might be fast and aggressive or thoughtful and tricky. Whatever your style, you can become a champion! With fencing you develop your mind, body and self.

Fencing was considered the Sport of Kings because it was practiced by royalty and the upper class. The fencing arts were practiced for the sport and to learn to protect themselves should they end up in a duel.

Fencing has become an Olympic Sport. In fact,  it’s one of only 5 summer sports contested in every modern Olympic summer games since 1896. It is a fun and very safe individual activity that is terrific for all ages and athletic abilities. It is also a multi-dimensional sport that teaches people to enjoy winning and to profit from defeat. It has often been referred to as “Physical Chess” because you learn to overcome your opponent by using strategy, technique, and physical endurance.

Fencing for all ages

Fencers learn to make complex decisions, to analyze problems, and to think quickly. They develop Life Skills that help them achieve their potential in all that they do. Fencing encourages the development of self-confidence, teaches respect and promotes fitness. Fencing is also a great activity for developing general athletic skills including: hand to eye coordination, speed, and agility. Fencers learn to compete individually as well as for a team.

In advance of the 2016 Summer Olympics in Rio, the International Fencing Federation (FIE) put together three short videos explaining each of the fencing weapons. Apex Fencing Academy offers instruction and training in foil & épée.

The second season of Apex Fencing Academy's Novice Cup ended with a whimper and not a bang. Coronavirus and COVID-19...
Read more

Jacob Huth I started fencing six years ago at the American Fencing Academy of Dayton, Ohio after discovering fencing at...
Read more